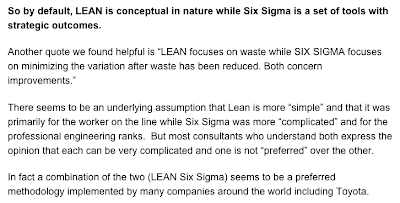 "a combination of the two (LEAN Six Sigma) seems to be a preferred methodology implemented by many companies around the world including Toyota."

Let's be clear -- Toyota is NOT a Six Sigma company. I've heard others claim this and it's factually incorrect.

I was a guest at the Toyota San Antonio plant when somebody asked a manager if they used Six Sigma. The manager plainly said, "NO, we use the seven basic QC methods but we don't train belts and we don't do Six Sigma."

Toyota does NOT use Six Sigma.


Not long ago, in its global pursuit of the Truth, the Consultant Debunking Unit (CDU) journeyed to Japan for a tour of the car-making facility in Toyota City. Guided by engineers, we heard a lot about the legendary quality of Toyota's vehicles. Eager to show we knew a thing or two about quality ourselves, we soft-balled our hosts with the obvious question: "When did Toyota start using Six Sigma, anyway?"

Long silence. After some awkward consultation in Japanese, the engineers asked us, "What is Six Sigma?"

Looking back at the quote from the top of this post, I could also take issue with the "Lean is Art and Six Sigma is Science" comment, but maybe that's best left for another post.
Posted by Mark Graban at 2:59 AM