I received a promotional email from a company that makes money by training and certifying belts.

This infographic lists six roles... I was curious if I could find six things wrong with the diagram and the assumptions of many approaches to "Lean Six Sigma." Click on the illustration for a larger view. 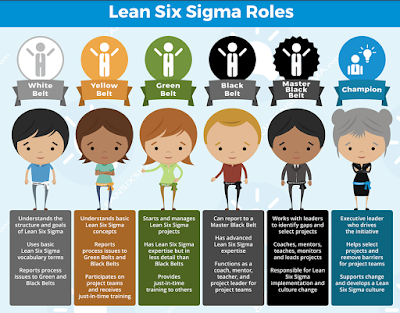 For one, the emphasis is on training and projects. That's, at best, a starting point for the adoption of a new management system and an organizational culture.

Two, why do you need so many levels of belts. The only apparent difference between White and Yellow belts is that White Belts aren't allowed to participate in projects? Why would you exclude any employee's input? That sounds like an excuse to sell yet another belt for another fee.

Three, I'll emphasize that everybody should be involved in improvement (that's the Kaizen approach within Lean)... and, again, not all improvements should be considered a "project." Small "just do it" and PDSA style Kaizen improvements are small and don't require project formality.

Four, why are process issues being reported to Green Belts and Black Belts? Where is the role of the actual managers of areas in which the belts work? A better Lean approach would have direct supervisors, managers, directors, and above being made aware of problems and opportunities for improvement, not just belts.

Five, can a "Master Black Belt" really be "responsible" for implementation and culture change? That's the role of executive leaders.

Six, "champions" shouldn't just support change, they should be directly involved by setting goals and direction... and clearing obstacles along the way.

Well, I found six problems or concerns. What about you?